The scientific method is a systematic procedure to acquire knowledge about cause and effect in the phenomenal world.

It is nothing more -- and nothing less -- than formalized common sense. In fact, the scientific method comes so naturally to us, it is so embedded in our daily actions, that we often have difficulties detecting the individual steps. 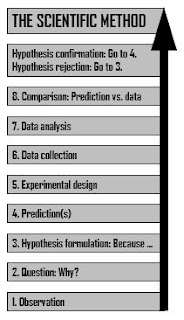 Figure: The steps of the scientific method. Start at the bottom.

The steps are illustrated by a simple example: It is evening and getting dark outside, and you decide to turn on the light. You walk over to the lamp and turn the light switch ...

1. You make an observation: The light failed to come on.

3. You formulate a hypothesis: The light failed to come on, because the light bulb is burned out.

Cause: The light bulb burned out.
Effect: The light failed to come on.

(In fact, several hypotheses may come to your mind: The light failed to come on, because ... the lamp is unplugged, the light bulb is burned out, the lamp is somehow broken, a fuse has melted, there is a power failure in the building, there is a citywide blackout, ...)

4. You make a prediction: If the current light bulb is replaced by a new light bulb, the light will come on.

5. You desing an experiment: You replace the current light bulb with a new light bulb.

6. You collect data: You turn the light switch, and the light comes on.

7. You analyze your data: You turned the light switch, and the light came on.

8: You compare your predictions with your data.

You predicted: If the current light bulb is replaced by a new light bulb, then light will come on. You observed: After the light bulb was replaced, the light came on.

Failing to reject a hypothesis does not mean that a cause for an effect is determined. For example, imagine there was a citywide blackout which was resolved in the time it took you to replace the light bulb. While you failed to reject your hypothesis and must therefore accept it, the true cause for the light failing to come on was the blackout.

The knowledge produced by the scientific method is universal in space and time, empirically testable, and replicable. It is also provisional.

We live in times where a lie is halfway around the world before the truth gets halfway out of bed. From half-educated half-wits declaring...