Reality is comprised of many things -- from light, to sound, to molecules, from the stars in the universe, to the sand on the beach, to the trees in a forest, from the people in the city, to the objects in your living room, to the organs in your body. How to think about reality? Think about it.

A red apple is an object that is made of atoms which consist mostly of empty space and that reflects light with a wavelength of 700 nanometres.

Figure 0.2.1: From external reality to observation to a statement about the observation.

The first translation, between external reality and observation, falls into a branch of psychology called sensation and perception. For an observation to happen three transitions must occur: First, in a process called transduction, your sense organs convert the external input from your physical environment (electromagnetic waves, pressure waves, molecules) into neural activity. Second, in a process called sensation, your brain extracts relevant information from the neural activity resulting in vision, hearing, touch, smell, and taste. And third, in a process called perception, your mind interprets these sensations in a meaningful way, e.g. the colour red of an apple-shaped apple-tasting object. The details of sensation and perception are complicated and not fully understood.

Often, we can measure external reality using scientific instruments that translate measurements of things we cannot observe (wavelengths, radioactivity, bacteria on a surface) into something we can observe (colours, sound, numbers).

All of this would be difficult enough if external reality were static. But external reality is not static, it is dynamic, things change, light turns into heat, atoms form chemical bonds, molecules disintegrate, calves are born, cities grow, mountains erode. 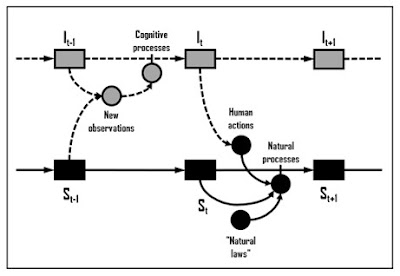 Looking at the processes depicted in Figure 0.2.2, one could conclude: Mother Nature hates us.

3: She never varies only one variable at a time, which makes it difficult to assign a cause for an effect.

Observing the world, extracting information from it, and acting on this information is not a trivial matter.